What Is Co-Extrusion When Is The Process Preferred?

What Is Co-Extrusion When Is The Process Preferred? 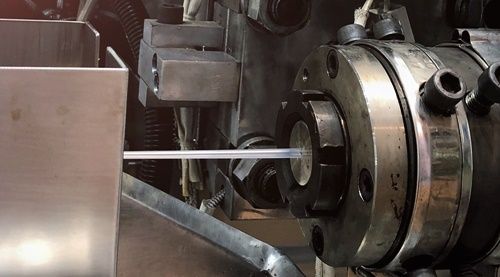 In a co-extrusion process, two or more materials are extruded through a single die in order to combine or weld into a single structure before cooling. Co-extrusion has the benefit of preserving each material's intended distinctive features in composite products, which would be hard to do with any single material. The typical co-extrusion procedure involves feeding solid plastic pellets into a forming mechanism, where jacketed compression heats the materials and feeds them into a die. The co-extrusion process is executed by passing the pellets through a single extrusion head, also referred to as the die, after they have been combined and melted. The mixed materials are fed through the die, creating a multi-layered cylindrical rod that is cooled with water and cut to the desired length.

Co-extrusion is the process of creating layered or enclosed items using several extruders. Each extruder delivers the precise amount of molten plastic required for the process, and five or more materials may occasionally be employed in a single cycle. Depending on the point at which the several melt streams are combined, the procedure might vary. It is feasible to handle polymers with significantly different viscosities and melt temperatures, and each layer's thickness and flow rate may be separately regulated.

The Benefits Of Co-Extrusion

There are a lot of benefits to adopting the co-extrusion method, according to several well-known and internationally renowned businesses that do so regularly in their manufacturing processes. The following is a list of some of these benefits:

•Capacity to create multi-functional structures with several layers in only one step.

•Fewer stages in the standard extrusion process are required

•Possibility of using a recycling layer

Numerous well-known businesses claim that there are certain drawbacks to the co-extrusion method. These are a few of these drawbacks:

•A combination's favorable physical qualities result from small variations, yet these same differences also cause the combination to be incompatible.

•To maintain a laminar flow throughout this procedure, polymers must have comparable melt viscosities. Depending on the material's placement within the composite structure and the layer's thinness, all viscosity variances may be more or less tolerated.

•Calls for a more advanced extruder and its operator. This means higher equipment maintenance costs.

•Need careful consideration and preparation while designing the system

In a typical extrusion process, solid plastic pellets are gravity fed into a forming mechanism where they are melted and fed into a die by jacketed compression screws. Coextrusion, in contrast, uses many extruders to create layered or enclosed pieces. Each extruder delivers the precise amount of molten plastic required for the process, and five or more materials may occasionally be employed in a single cycle. In contrast to regular plastic mixing, each separate plastic is blended into a compound-material part while maintaining its original qualities. The properties of the separate ingredients may change if blended before extrusion, but the finished product is still homogenous.

Because certain polymers won't stick to others, not all plastics are appropriate for coextrusion, but this issue is frequently resolved by adding a conductive intermediary layer. Plastics with vastly varying melting points are also inappropriate for the procedure because the lower melting point material will degrade. Finally, because of the potentially violent reactions that might happen when they are combined, PVC and acetals should never be coextruded together.

Plastic is extruded into blow-molded tubes that are trimmed to size and partially molded in molds. The material is then forced into a cavity by pressurized air, which gives it its final shape. The food and cosmetics sectors frequently employ blow-molded goods, such as bottles. A barrier layer is coextruded into the plastic to stop the container from leaking gases, smells, and moisture in order to lengthen the shelf life of a product. Because coextruded plastics have non-porous qualities that are comparable to those of glass and aluminum, breweries also use them for beer products.

Coextrusion is used by the energy sector to assist fulfill certain emission criteria. To create vapor-proof gasoline tanks that adhere to environmental standards, ethylene vinyl alcohol (EVOH) is coextruded with a number of polyethylene. Unexpectedly, EVOH is also a general-purpose barrier substance utilized in baby food, ketchup, and mayonnaise bottles. It is typically sandwiched between two layers of substrate despite being designated as food-grade.

Additionally, coextruded EVOH is used to produce transparent containers for vitamins and medicines. Coextrusion keeps broadening its functional scope even though compound plastic products have already found several uses in the energy, food, and medical sectors. Future coextrusion applications will be shaped by the development of workable mixes since the combination of polymers employed in the process determines how successful the products are by extrusion blow molding machinery and equipement producers .